Courage to meet the need ahead

Previous Next
Courage to meet the need ahead

Representative Lewis was a civil rights icon who fearlessly fought for human rights and racial equity.  He labored to create a society where all people have access to resources and opportunities. Many revered him as an individual who stepped boldly into an issue and forged ahead, even in the face of adversity and risk to his life.  His legacy stands as a reminder of the uncommon courage and determination it takes to affect change and progress.

On April 25, 1979, another Lewis, Minnesota State Senator B. Robert Lewis, died in office of a heart attack at the age of 47.  B. Robert Lewis was the first African American to serve in the Minnesota Senate. He sponsored legislation to help victims of family violence. Because of this, 360 Communities named its Lewis House emergency domestic and sexual violence shelters after him.

Both of these men were driven by a fierce determination to elevate the well-being of people affected by inequities in society.  They used courage with action to make system changes and provide opportunities that have a lasting impact. It was a lifetime of work, not a quick fix. 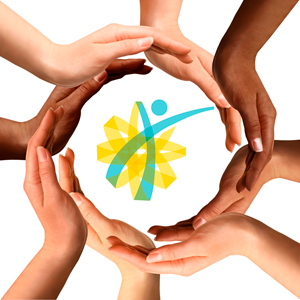 360 Communities tag line; “Help in the moment.  Hope for the future.” describes a dual approach.  We are about meeting immediate needs AND delivering support that provides opportunity for a safe and stable future. This requires longer-term work, not just a quick fix. Both are necessary.

There are many good nonprofit organizations in Dakota County stepping up their efforts to provide the short-term help necessary for daily survival. We are humbled to work with these nonprofits to meet people’s immediate needs, like providing food. Together, we can meet increased demand caused by Covid-19.  However, significantly fewer nonprofit organizations are equipped to provide the next level of longer-term support required to get people back onto stable ground. This is where 360 Communities’ dual approach makes a difference. 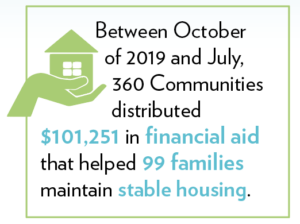 360 Communities is an essential community hub for people to access both immediate and long-term support. In addition to providing basic needs services, we are preparing for the complex challenges people will be facing when the eviction moratorium and enhanced unemployment benefits end. We understand how to provide holistic support beyond food.  Providing stability through this unprecedented time will require an immense amount of help. This includes everything from rent, housing, finances, and unpaid bills to student distance learning, family violence, employment, health, and insurance.

The challenge we face together

In May and June of this year, unemployment rates in Dakota County shot up to 9% and 10%, according to the Minnesota Department of Employment and Economic Development. The high mark for the prior three year period was 3.5%. The need for
360 Communities’ longer-term support services is evident.

No one is immune from job loss or the ill effects of Covid-19. That said, the current environment acutely impacts the people 360 Communities serves.  We know that the pandemic disproportionately affects the working poor. Many perform essential front-line jobs in retail, public transit, the service industry, and healthcare. This puts them at higher risk for job loss, infection, and illness. Many also suffer from underlying health conditions caused in part by limited access to nutritious food and inadequate health care.

Additionally, we are also seeing new faces – people who never thought they would need help from 360 Communities. For example, they could now be living with job insecurity, unemployment, lack of affordable housing, limited access to food, loss of health care, unreliable transportation, or any combination of these.

360 Communities is ready and uniquely positioned to help. While meeting the immediate community needs around us, we are positioning ourselves to provide critical support during the next phase of recovery. We’ve already secured additional funding to support housing stability and added a position to perform that work.  Additionally, we’ve added three positions in our resource centers through the end of August with the focus on providing holistic support services.  Also, we’re seeking funding to add year-round positions that focus on longer-term support. Know that our staff and volunteers are courageous and determined to fulfill our mission: 360 Communities delivers safety and stability that improves lives.

Let’s learn from the examples set by John Lewis and B. Robert Lewis to boldly confront our current obstacles and create a hopeful future where everyone has access to everything they need. Together, we have the courage and drive within us to change the future of our communities.

In Dakota County, we believe in our neighbor’s well-being. Thanks to all of you who have shown that by stepping forward to provide volunteer hours, donations, food drives, and more. We appreciate you. Our future depends on our ability to unite and make a measurable difference.