The Vicksburg family drove into the Burnsville Family Resource Center parking lot in a Ford truck with everything they owned. They told 360 Communities staff and
volunteers they were hungry and out of options. Volunteer Sue completed a financial screening to understand the depth of the family’s crisis.

They had moved to Minnesota last fall from Pittsburgh to start a new life. Frank was a plumber who was working side jobs, while he and his wife Kelly were looking for full-time employment. Initially, they and their two young daughters, lived with relatives. But when teenagers in the home began physically abusing their daughters, they moved into a motel to keep the girls safe. 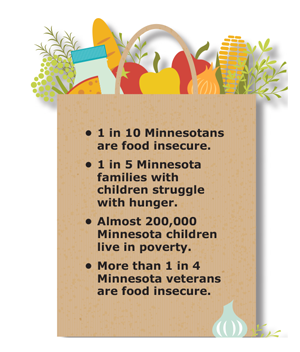 When it comes to the individuals and families we serve, there are a number of contributing factors that bring them to our door. Volunteers and staff at 360 Communities’ network of five food shelves and two family resource centers are aware of the complexity of each person’s situation. An estimated 30,000 Dakota County residents, including our food shelf customers, are experiencing poverty. And for many, poverty presents itself in multiple ways: poverty of nutrition, poverty of housing, poverty of safety, and poverty of support systems, to name several.

For many, hunger is just a symptom of larger self-sufficiency issues. A food emergency situation allows 360 Communities to start the conversation with our food shelf customers so that we can fully understand their needs, and then see how we can help them with additional resources and programs.

For some, hunger is just one of several pressing concerns. The Vicksburgs had used all of their savings to pay for the motel, and when they ran out of money, they came to 360 Communities. They were hungry, stressed and were facing their first night sleeping in their truck. That first day, with nowhere else to go, they stayed in the resource center for six hours. Staff and volunteers gathered food from the food shelf and cooked lunch for the family in the resource center kitchen. Struck by how well the girls behaved, a volunteer told Brittany that she was impressed with what a good listener she was. The four-year-old, with her mouth full of apple slices, said, “Thank you for the food! This is all we had to eat today.”

While the Vicksburgs were in the resource center, 360 Communities staff and volunteers worked with church partners to fund more nights in a motel and then worked with Dakota Woodlands to secure a long-term housing solution for the family. This is just one instance where 360 Communities was able to help a family in a holistic manner. Because the Burnsville Family Resource Center also has a food shelf, the Vicksburgs were supported with food in addition to housing.

This is the last week of the Minnesota FoodShare March Campaign. This annual food drive benefits about 300 food shelves across the state, including 360 Communities’ network of five food shelves. In March, you have the opportunity to maximize the impact your food donations have on families like the Vicksburgs.

360 Communities would like to raise $75,000 and 75,000 pounds of food during this campaign, enough to feed 22,500 people for a week. For every $10 donated, we can purchase $30 worth of groceries with our access to discount food programs. In addition, every donation to our food shelves in the month of March, food or money, will generate a larger portion of Minnesota FoodShare’s grant distribution for 360 Communities, further stretching the impact of your gift.

360 Communities can do more with your food shelf donations. We can change lives
and strengthen communities to a new degree.