Proposed expansion, courtesy of the City of Rosemount.

Governor Dayton recently signed a bonding bill that included $450,000 for the expansion of the 360 Communities Rosemount Family Resource Center!

For more than a year, 360 Communities has been working with Rosemount Mayor Bill Droste and other city officials to pursue state funding for the much-needed expansion. The City of Rosemount has been a steadfast partner in supporting the excellent work of 360 Communities at that location. 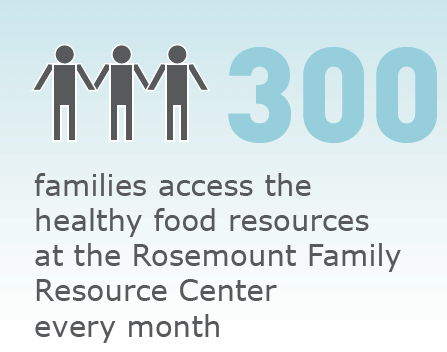 The Rosemount Family Resource Center has been a source of community unity and strength, serving as a central gathering place for people to give and receive. The city owns the building and has allowed 360 Communities to provide services out of that space since 1999. For the past several years, demand for services at the location has steadily increased. Between 2014 and 2017, food shelf visits rose more than 123% as we increased the amount of healthy food we distributed to our food shelf customers.

The facility is currently about 1,601 square feet and is at full capacity. The proposed expansion will more than triple the space to 4,921 square feet! This change will help 360 Communities provide more healthy food, resources, and programming to families.