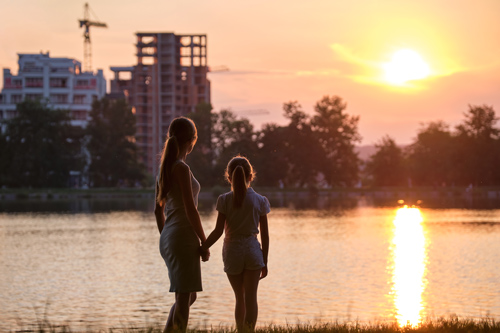 Heather remembers almost passing out as her estranged husband choked her in a rage, with her eight-year-old daughter asleep in the other room. She hit him with her phone, escaped to another part of the house, and locked herself in a room. She called 9-1-1. Police arrested him that night and took him to jail. This incident was not the first time the police had been called to her home for domestic violence.

Police connect the victim to 360 Communities

Later that night, a police officer returned to her door to speak with her. He handed her a card containing 24/7 contact information for 360 Communities’ violence prevention and intervention team. Heather did not call at first, but knew she needed help when her husband was released and began to stalk her.

Building an army of supporters

Heather called the 360 Communities domestic violence hotline and connected with a 360 Communities outreach advocate. The advocate listened to her story and believed her. She assisted her with filing for restraining orders and supported her through her divorce. The advocate offered safety planning and emotional support for Heather and her daughter. “I knew, in the back of my mind, Lewis House was there,” says Heather, “I had a bag packed at all times, sitting in my closet, ready to go. My daughter’s things were in there. We had whatever we needed.” She took comfort in knowing they would not be homeless. Heather recalls that the advocate advised her to build “an army of supporters,” a network of people she could count on to be in her corner.

Today, Heather and her daughter are safe and in a new home. She focuses on her future as a caring mother and successful real estate agent. Her experiences and the support she received from 360 Communities have taught her that she has a power she can share with other victims. “It’s our job to decide the life we want to live. If you want a different life, you have to decide that you’re capable of creating it,” says Heather, “And then every day, you have to decide to do one thing to get there. You just have to decide that you are worth it.”