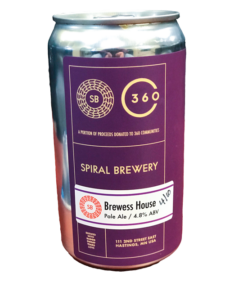 Spiral Brewery in Hastings first learned about 360 Communities and our Lewis House domestic and sexual violence shelters through the Women Inspiring Women organization with the Hastings Chamber of Commerce. Brewing a beer for Women’s History Month/International Women’s Day is something that breweries have done in the past. But according to co-founder Jen Fox, Spiral Brewery recognized an opportunity to add something special by supporting 360 Communities.

They contacted Lewis House Supervisor Vicki Illa with their unique idea: creating a “Brewess House” IPA to raise awareness about domestic and sexual violence and support Lewis House with the proceeds.

“360 Communities and The Lewis House means access to opportunity and stability for many families in Dakota County. The Lewis House is such a critical program in Hastings. It was our first thought!” Fox said, “We also know  Vicki Illa knows a thing or two about brewing beer. She was a huge help during our brewing process.”

Spiral invited Illa to help create the IPA, and 360 Communities staff visited the brewery for a COVID-safe tasting.  Fox says the mission of Spiral Brewery is to “brew community through quality beer and rich history.” She is excited about this ongoing partnership with 360 Communities.

“We know that bringing people together and creating space for building community are stepping stones to strong giving trends for non-profits and organizations in our community,” Fox said. “If we can help share stories and raise awareness for the incredible efforts of 360 Communities and The Lewis House, we are doing our job.”