Previous Next
Supporter organizes fundraising events open to the public

Giving back has been an essential part of John Lynch’s life for the past 40 years. To him, “it just feels right.” He started volunteering by helping coach Little League and high school baseball. 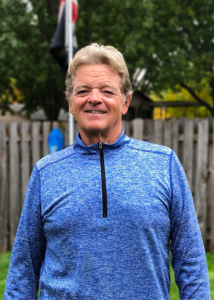 Lynch is also a Vietnam veteran and has volunteered to support veterans’ causes. He is retired but currently serves as the Benefits Coordinator for the Vietnam Veterans of America, Chapter 639. Lynch says his time in the military taught him about sacrifice and paying forward good deeds.

“When I was in Vietnam, I was wounded and carried out of the jungle by my brothers,” said Lynch. “They gave me their blood. Without them, I wouldn’t be here.”

He also feels a personal connection and empathy for women and children experiencing domestic violence and he has spent time working with children at the Hastings Lewis House.

“I was raised in an unsafe household, so I want to see others have a better life,” said Lynch.

Over the years, he has become adept at garnering community support to create a more significant impact. Lynch has been organizing fundraisers annually, many that have benefited the 360 Communities Lewis House domestic and sexual violence shelter in Hastings. In August, he organized the 10th Annual Poker Run, a motorcycle and antique car ride. In September, he launched the First Annual Vietnam Veterans of America Charity Golf Tournament. The events raised more than $1,500!

Lynch’s impact goes beyond the dollars raised. He is building a community of allies to the violence prevention and intervention movement.

“I could not do this without all the wonderful people helping,” said Lynch, “It’s not just me. I get a lot of credit for
what others do to help me.” He says that his daughter and wife are his rocks, working with him every step of the way.
Lynch also credits the Vietnam Veterans of America, Chapter 639 and Bugg’s Bar of So. St. Paul as active partners with this fundraising work.