Join the Team: Say NO MORE

Previous Next
Join the Team: Say NO MORE

Recently, the Minnesota Gophers Men’s Basketball Team visited 360 Communities to help out at our Burnsville food shelf and then traveled over to our Lewis House sexual and domestic violence shelter in Eagan. This is the team’s second visit to 360 Communities and shows just how committed these young men are to their surrounding community.

The visit came at a time when the issues of domestic violence and child abuse are front and center in this country because of high profile incidents involving NFL players, including the Minnesota Vikings’ Adrian Peterson. A positive note in all of this is that domestic violence and child abuse is getting some much needed attention. Depending on how we move forward, we may be on the verge of incredible change in how men engage in these issues.

These problems are much bigger than the NFL, than one sports team, or one community. These are endemic problems in our society that require a sea change in thought and action to turn the tide.

When I see people like CBS Sports Broadcaster James Brown and former Vikings star Cris Carter leading on these issues, I am encouraged. These things tell me that we are starting to see a culture shift. The real work of changing the community, though, begins with each one of us taking a stand. According to the Mary Kay Foundation, “domestic violence is rooted in social customs that reward people for having power over others. Victim blaming and the lack of serious consequences for abusers perpetuates violence against women and others.”

So what are we going to do with this moment in time? We, all of us, have the power to make it socially unacceptable to abuse anyone in any way. We have the power to hold this cause closer to our hearts than we do victory on any sports field. 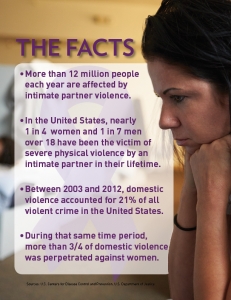 October is Domestic Violence Awareness Month. According to the National Coalition Against Domestic Violence, an estimated 1.3 million women are physically assaulted each year in this country. The U.S. Department of Health and Human Services says that in 2012, 1,640 children died from abuse. It is in all of our interests to change a culture that allows these tragedies to occur.

This will require the initiative of everyone, not just athletes, to change the conversation that happens outside of the public arena. 360 Communities is a local ally of the national NO MORE campaign (www.NoMore.org), a national print and public service announcement campaign spearheaded by the Joyful Heart Foundation that seeks to shine a light on sexual and domestic violence across the country. The objective is to put an end to, not just reduce, sexual and domestic violence.

When the Gophers Men’s Basketball Team visited 360 Communities, they not only gave of their time by playing with children who have witnessed and experience abuse in their homes, but they educated themselves about domestic violence and the importance of positive role modeling. They learned about the NO MORE campaign and pledged, as a team, “NO MORE silence. NO MORE violence.”

It would be an incredible start if not only every sports team took this pledge, but every person. Will you join us in saying NO MORE?

The NFL has employed a domestic violence education and prevention advisory group that includes a co-founder of the NO MORE campaign. NO MORE public service announcements are now playing during NFL games. This is a positive development that will only move the ball closer to our goal of eradicating sexual and domestic violence in
this country.

When a person abuses another human being, they are stealing that person’s sense of security, they are taking their confidence away, and they are clouding their optimism for the future. Let’s value those in this society who build people up with encouragement, not those who tear people down with abuse. Let’s fill our stadiums and college campuses with curious and confident students who are ready to thrive in school and succeed in life when they graduate. When we change our culture in this way, we change our future … for the better.