Previous Next
360 Communities Builds Awareness with National NO MORE Campaign

The pictures were of a woman’s face, battered and bruised. One eye was purple and swollen. And she wore an expression of hopelessness, as if everything had been taken from her. The pictures were attached to an email sent through our website seeking help. They are difficult to look at, let alo

When it comes to domestic and sexual violence, most people shy away from these topics because they are painful, shameful, and difficult issues to discuss. At 360 Communities, we specialize in starting conversations that alter perceptions and promote positive action to affect the long-term health of our communities. So when 360 Communities first engaged with the national NO MORE campaign over a year ago, we recognized a genuine opportunity to affect change in Minnesota. The campaign has simple branding and messaging represented in the shape of its logo, a teal circle with a hole in the center of it – a zero. The national print and video public service announcement campaign seeks to spark a dialogue around the issues of sexual violence, domestic violence and child abuse. The goal symbolized by the logo, is to end violence, not just reduce it, by bringing this problem into the forefront of community conversation. 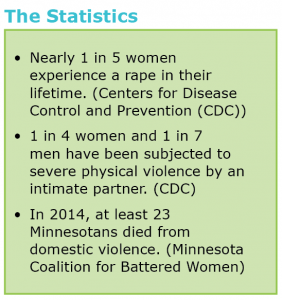 You may have seen the public service announcements featuring well-known celebrities and athletes playing during NFL games. The movement has gained significant momentum as evidenced by a NO MORE Super Bowl advertisement. For the past 14 months, 360 Communities staff members have worn NO MORE pins daily to show solidarity with the campaign, but more importantly, to start conversations when we are outside of the walls of our office. When you wear a teal pin on your shirt, people are curious. They’ll ask, “What’s with the blue pin?” At 360 Communities, we have found that it opens the door to talk about domestic and sexual violence and, many times, to engage in deeper conversations about the NO MORE campaign and how we can individually take action to prevent violence and educate others.

We share the statistics and inform people about the programs and resources 360 Communities offers right here in Dakota County through the Lewis House sexual and domestic violence shelters in Eagan and Hastings. 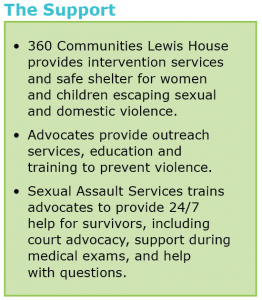 360 Communities recently began producing our own NO MORE videos, featuring staff, volunteers and survivors. At our recent Domestic and Sexual Violence Awareness Luncheon in February, we played a sample of these videos for 360 guests and made a request for more volunteers to record NO MORE messages. About 70 people signed up and we have scheduled recordings with the help of Burnsville Community Television and Hastings Community Television for this month.

The NO MORE campaign is demonstrating its power to inspire not only celebrities, but everyone to stand up and have their voices heard. And this is how change happens. It takes people who do not normally engage – the silent majority – to start the necessary conversations that lead to action. Please take action and be part of saying NO MORE to sexual and domestic violence in Minnesota by attending one of our upcoming events. Let your voice be heard on social media. You can purchase your own NO MORE pin and find out more about the campaign at NOMORE.org. Let’s make Minnesota a NO MORE state. If we are going to do this, every voice, including yours, counts. Join us and say NO MORE today.